I've heard lots of motorcyclists talk about the Spot Personal Tracker device. It uses satellites to track your location, create maps of your routes, send emergency alerts if needed, calls selected personal phone numbers in non-life threatening situations, and other things depending on the unit. I've always liked the idea of being able to track my route because I have such a terrible memory. Those I-wonder-where-this-road-goes trips are especially difficult to put down after the fact. So, when I happened to find this: 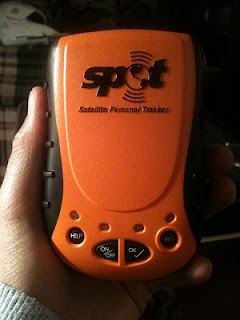 on the 70% off table at the Eddie Bauer Outlet Store, I couldn't resist. I haven't subscribed to the satellite service yet so I can't tell you anything about it. But, this link tells you all about this particular unit. It looks like the basic service is about $100 a year plus $45 a year for the tracking service. I can't wait to try it out. :-)
Posted by Allaina at 8:49 PM 3 comments:

So, my birthday is coming up in about a month. I've really been wanting to take a dirt bike school class through the MSF or some other organization. Oddly enough, here in Colorado, there aren't very many close to the Denver/Boulder metro area. That still surprises me. I would think in this state, they'd be very popular. Anyway, one place I'm considering is going to Atlanta. My brother and mother live there. In Atlanta, there is a Honda campus that offers the MSF Dirt Bike School classes. And there is a class the day after my birthday. And, best of all, I have enough frequent flyer miles to get a ticket! I think my brother will take the class with me. That will be the most awesome thing ever!! Stay tuned....

Nothing eventful has happened since my last post. Which, by the way, was only a one day time out. I just hadn't been very inspired to blog lately. This half marathon training is really taking up all my time. But this weekend seemed to make up for that.

The hubby and I went for a lunch ride on Saturday. We hadn't been on the bikes together in a long time. So, we were overdue. We decided to ride out to Famous Dave's BBQ in Thornton. It's more or less a straight shot up Wadsworth but Wadsworth is hardly ever a straight forward drive. It is a heavily used multi lane highway that runs north and south through town. I generally avoid it but some times it is the most direct route to take. It is an alternative to the super slab when heading to points north. Another thing that made the ride a bit more hectic is that I didn't bring my headset. So, we couldn't talk to each other as we traveled.

The first incident happened about 30 blocks into the ride. Hubby was leading and came to a stop at a yellow light. It wasn't a quick stop but apparently the car behind the car behind me wasn't paying attention. That car nearly rear ended the car behind me - squealing and smoking tires and all. In my mirror, I could see it all develop and I watched the offending car swerve to one side, into the already occupied left lane. Fortunately, he or she didn't hit anything and we all carried on. I don't know how much my hubby could see in his mirrors but he certainly heard the squealing tires. We weren't in any danger, or it didn't appear that way anyway. It certainly wasn't the first time we've had squealing tires around us. At any rate, it would have been nice to have the headsets to check in at that point.

About 5 blocks later, the three lanes of traffic merge into two.

Another 30 or so blocks later, we were approaching the US-36 overpass. This intersection can be quite frightening. The speed limit drops from 55mph to 35mph within a few blocks. Within that span, there are several stoplights and traffic is merging on and off of US-36, as well as the frontage roads running parallel. There is also a small airport nearby, a regional transit park and ride, and a shopping area with a Target store. Lots of activity. Oh, and of course, some construction thrown in every now and then making things interesting. Most of the construction is done but the merging lanes and such have been recently redesigned. We were traveling in the right lane. Traffic in the left lane started backing up because the light was red. Our lane was gradually slowing. Yes, a recipe for disaster. As we are slowing but before I had to put my foot down to stop, I checked my right mirror and see an SUV behind me that doesn't appear to be slowing. In an instant it seems, the image in my mirror became very large and close. He wasn't going to stop.

It's amazing to me the number of thoughts that can go through your mind in an instant. It's especially amazing to me because I have such a bad memory. I think it's genetic and I've told my husband to prepare himself for our future - me asking repetitive questions and him calmly answering them over and over.

I began to accelerate. I was positioned in the right part of the lane following behind my hubby who was traveling in the left part of the lane. There was plenty of room for me to pull up next to him quickly. As I began to accelerate, the SUV driver hit his brakes - squealing tires and smoke. He also pulled over into the left lane, fortunately, not hitting anyone there. Later, it seemed to me that he (or she) realized he was about to hit me and decided to pull over to hit the other cars instead of me.

Hubby didn't realize the near miss. At the next light I pulled up next to him and told him we needed to pull over. I was shaking and pissed off.

In that instant before I accelerated, these are the things that went through my mind:

As soon as it was over and I/we were out of harms way, I managed to look back at the driver to glare at him. Of course, he couldn't see my glare under my helmet and that was ok. I just wanted to see where he was so that I could stay away from him as we traveled on. Actually, I wanted to scream at him - "Are you out of your fucking mind?!" - but that wouldn't have accomplished anything. Then, I had an adrenaline rush and started shaking and we pulled over.

Hubby still wasn't sure why I needed to pull over. But, I more or less calmly explained it, or not so calmly, I don't remember that part. He said he hadn't even noticed which I think made him worried. I just needed to vent and calm down before we carried on. If we'd had the headsets, I would have more easily explained to him what was going on but pulling over was probably better anyway. We considered going across the street to the McDonald's for lunch but once I calmed down everything was ok. We carried on, paying more attention to the cagers, and made it to our destination without any further incident.

Over lunch we talked more about it. We are pretty good about taking these experiences and learning from them. We like to talk things out and go through them step by step. What did we think happened? What would we have done differently? That sort of thing. I was amazed and quite happy to know that the training from those motorcycle safety classes kicked in. I don't practice those things even though I know I should. I just feel more comfortable practicing and getting feedback on what I'm doing. It's a lame excuse but true. But, I didn't even think about accelerating out of harm's way, I just did it. Wow. That made me feel good. I was able to see the situation, evaluate it, and execute. I am so taking a class every year from now on!

For the record, this is what I look like from behind. I had hubby take this photo after we got home so I could put it in this blog post. 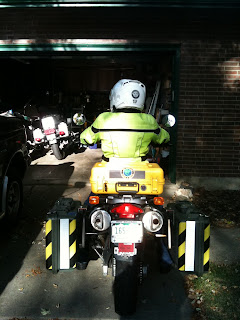 I think I look pretty obvious but apparently, it doesn't matter to anyone who isn't paying attention. The first incident wasn't even because they didn't see me. It was because they didn't see the car behind me. Fortunately, that put me on high alert. Being aware of the conditions and potential dangers on the road we were on also helped. I was anticipating the situation we were in after the first incident. That particular intersection and stretch of road is some times part of my commute. Actually, it is no longer part of my main commute for that very reason. It's very dangerous.

After lunch, we came home via the super slab I-25. It was better because there wasn't so much stop and go. But, it's still the interstate with all of it's inherent dangers. We made it home safe and sound though.

Oh, when we got home, hubby says, "I think there's something wrong with my rear brake. It's not stopping."
Posted by Allaina at 2:58 PM 3 comments: