I promise to get it written up soon! We had a great time! One national park, one national monument, two state parks! Hooray for Utah! 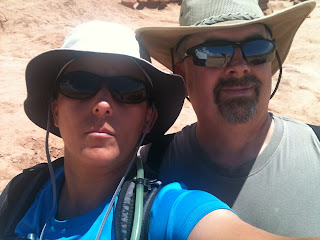 Going back to work is exhausting! :-/

This year, our anniversary road trip is more about the destination and less about the ride there. As I type, we are on the way to Utah. We've seen a few motorcyclists on the road already. But we have no regrets about taking the Subaru on this trip. Having the car will allows us to spend more time exploring the park and more time hiking. I'm excited!
Ride safe folks and enjoy the ride. 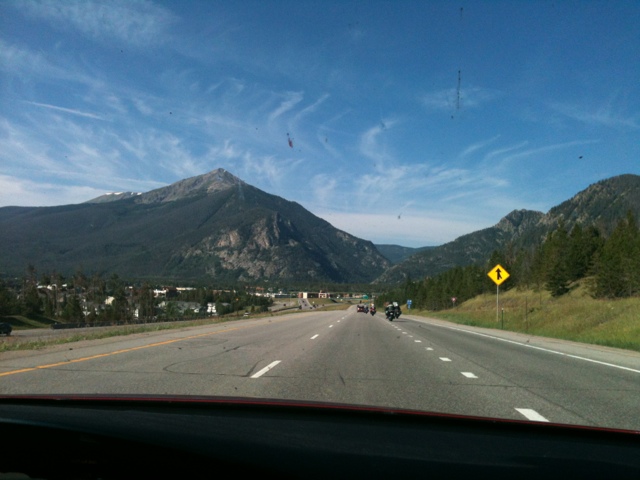 We leave Sunday morning for Capitol Reef National Park! Woo hoo!! I'm super excited to have a full week to spend with my lovely hubby! We are definitely taking the car for this one. It's just going to be more comfortable with the heat. No worries though. A make up motorcycle adventure is in the planning, at least in our minds. :-)

I purchased the Utah Gazetteer for the trip. We've checked out several library books - hiking guidebooks. I'm making my packing lists. Last load of laundry on Saturday and a bit of shopping, car wash and vacuum, and a last check on some things around the house.

Stay tuned for the trip photos and reports from the road! :-)

Well, first let me say that nothing horrible has happened. That's the good news. However, here is my tale of woe.

What a day. So, I didn't even get very far from my office. I was at the light at 28th and Arapahoe, just a few blocks from my office, when the bike hesitated. So, I gave it some throttle thinking I just hadn't throttled enough before letting the clutch go. (I don't know why I thought that.) The bike accelerated through the intersection and then just died. I was able to coast into a parking lot and even into a parking spot at a strip mall. Sigh. By then I was sweating profusely from sitting at the light and then not getting any airflow because I had to pull over so quickly. (Good gravy it was hot!) So, I took my helmet off, and jacket off, and peeled my gloves off, before trying to start the bike again. (I'd also tried to start it as I was rolling through the parking lot.) Nothing.

I walked over to a shady spot to text my friends. We were meeting after work for a ride to dinner. Then I called the hubby, who was, luckily, driving up to meet us for dinner. He rerouted to meet me where I was stalled.

My first thought was bad gas causing a plug again. I didn't really think it was the battery. The way it stalled just seemed more like fuel than power. I haven't had much experience with either but, whatever. Hubby seemed to think the same thing as well. So, we decided it was too hot to stand around messing with it so we went to the pizza place in the strip mall and had dinner and enjoyed the air conditioning.

We decided that if it didn't start we'd call AAA and have them tow it to Mike's Motorcycle, which is where my oil change appointment is on Tuesday. I wasn't sure how I felt about leaving it there since they were closed and it wouldn't be secure. But, I didn't think going all the way home was a good idea either.

After dinner it did eventually start but then it died again when hubby gave it some throttle. Then it wouldn't start again. So, we called AAA. In the meantime, it's starting to get late. The tow truck came and he wanted to try jumping it. It started and he drove off. I still didn't feel comfortable but with it running, we ,ay as well go home. With hubby there to follow me it seemed like the best idea. And then I noticed the sky. (I didn't get a photo because I was trying to get my gear on and get on the road.) It was kind of purple with flashes of light. Yikes!

We hit the highway with the storm to our west. No rain but lots of flashing cloud lightning and also really scary looking cloud to ground lightning. As we approached our exit, I decided I was done. I pulled into the park and ride and we left it there in the garage.
I took this video from the car after we parked the bike. It started to rain almost right after we were both in the car heading home. It rained pretty hard too. Those lightning flashes were what caused me to park the bike. I don't mind riding in the rain at all. I actually really like it. Lightning scares the crap out of me. Sitting at the light waiting to turn towards the park and ride, I would flinch every time there was a flash. Scary!

So, the bike spent the night in the parking garage where it was hopefully safe enough. We won't get to pick it up until after work today. Sigh.

The really bad news is that I missed watching "Sharknado" on SyFy last night! I really love those cheesy movies. I don't know why. They make me laugh out loud. :-) Sharknado. Hahaha!! Really?! Sharknado? Hahahaha!!
Posted by Allaina at 9:11 AM 2 comments:

It seemed like a good idea at the time... When we chose a date for our wedding, we decided on summer because most of the other things we celebrate are in the winter. Most of our birthdays are in November, then there's all the holidays that month and in December. And, since it was 2007, we thought getting married in the 7th month on the 27th day would help us to remember the date. Yes, that's a true statement. That plan was mostly for my benefit. But, guess what. It's freakin' hot at the end of July. So, we are considering driving rather than riding the motos for this next anniversary road trip.

The hubby suffers greatly in the heat. I do as well but I seem to be able to recover in the evenings. He's just always overheated it seems. We are thinking we'd enjoy hiking around the park and also driving there in 8 hours, if we are shuttling ourselves in air conditioned comfort. The funny thing is, I think we both thought of this idea simultaneously. So, there was not much discussion or even regret. Last night we thought we could take a motorcycle trip in the fall instead. Perhaps a nice fall ride to Steamboat Springs to see the changing leaves.

Truth is, we aren't getting any younger. We don't have anything to prove on these rides. The idea has always been to visit some place neither of have been before. We can accomplish that in the car or on the bikes. Perhaps this will spark some discussion of why we need a couple of 250cc dual sports to haul with us on these trips. I've seen a couple of these around town a lot lately. ;-)
Posted by Allaina at 9:44 AM 2 comments: