Had a good two days of commuting yesterday and today. This weekend there is talk of snow, rain and very cold (in the 40s) high temperatures. Sigh. It's the price we pay for living so close to the mountains.

Yesterday, after all my complaining about not riding when I had to run, I rode and I ran. I ran with some friends from work on a trail near Boulder. We did about 6 miles. Here is a photo of me gearing up after the run. 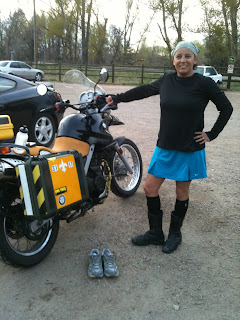 I just threw my moto pants and jacket on and headed home. It was a little chilly, being a little sweaty after the run, but as the season goes on, that will change. My legs weren't too happy with the ride home though. I'll have to spend more time stretching before getting back on the bike I think.

I tried to catch the brilliant red sunset on my ride home but it faded before I got to the pull out. Here's a photo of it anyway. It was something to see! Very cool! I wish I would have caught it in time. All of the pinkish parts were a brilliant red. 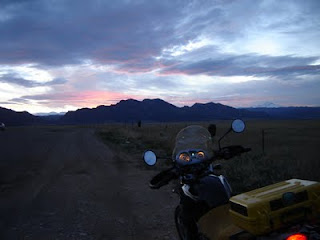 There is nothing to see her, obviously, since I haven't reported anything in two weeks. Haven't been riding much. I thought I was getting sick but realized I was just worrying myself sick. Not even for anything that deserves such worry. I have been focused, or trying to stay focused on my half marathon training because I'll be out of town for about 3 weeks straight four weeks before the half. First I'll be traveling to Fairbanks (for work, not by moto) for about a week. Then the day after I get back, I'll be flying to to Atlanta to meet up with my brother so he and I can drive to the Indy 500. (It's our 3rd trip!) So, lots of traveling, not much time for training. I've also taken to driving when I need to get a run in after work. It's just quicker because I don't have to change out of my moto gear into my running gear, and since it's still pretty chilly around her, I actually have to change out of my street clothes which I still am wearing under my moto gear. It's a process.

So, not much riding. Today I didn't ride because I had a dentist appointment yesterday and still feel a bit loopy from the Novocain or whatever it is they use. It's hard for me to get that stuff out of my system. Exercise actually helps they say, so that's good.

I'm hoping to be back to my normal self tomorrow so I can ride. The weather has been wet and cold. I've been wanting to try out my Olympia jacket in the rain too. I have a review I'd like to publish about that jacket but thought I'd get a rain ride in before I write it all up.

Anyway....I'm still around, just not riding much.

Here's a picture I took of the last time I rode, which was this past Friday. We had a department wide event with some posters showing our research or, in my case, library and archives activities. We have these nice archival metal edge poster boxes to transport the posters. Since my institution is not on the main campus, I had to bungee the box to the moto to ride there. :-) 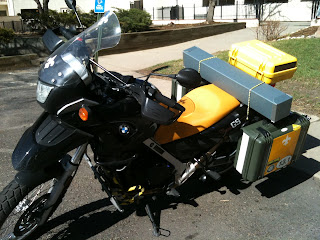 I'm investigating my next moto class. I really like taking the classes. It keeps my knowledge fresh in my mind and helps me to practice good habits. So, what should I shoot for this season? I'm looking at a couple of options right now.

Sharpen your slow riding skills and you will greatly improve your overall skills.

This motorcycle riding course, as presented by former police motor officer/trainer Don Gunn, concentrates on the low-speed maneuvers taught to police officers for the purposes of increasing riding proficiency as well as confidence. Learn to operate a motorcycle at its limits, with emphasis on turning in the smallest area, use of transmission, clutch and brakes for the highest level of control, and practice maximum braking and brake-and-escape maneuvers. Smaller-sized training bikes are used the first day of this two-day course; students are encouraged to use their own (safe, street-legal) bike on the second day. This course is for experienced riders only.


My hubby and I went to a Police Top Gun competition a while back and it was so amazing! I've been wanting to try a class ever since. Talk about confidence building.  I think I need something like that next instead of another riding class. Not that I've mastered anything, just because it might hold my interest a bit more and challenge me in ways I haven't yet been challenged.

And there is this one too offered by a different company. http://www.t3rg.com/Classes.htm#TopGunMotor It looks totally different from the other one. The first is taught by the company I've taken all my classes from. But I'm intrigued by the longer, more expensive class (and also the shorter less expensive class).

The other option is dirt bike school. There's finally a class offered in the metro area. I guess they were waiting for Spring time. That would be totally fun and also build some confidence on the bike but I think the top gun class might have more of an impact on my riding this season. Since I don't have any dirt bike riding buddies yet, I might wait to take that one later.  Right now it would just be 100% for fun. Not that there's anything wrong with that. It's just if I'm going to pay a couple of hundred bucks I may as well spend it on something I'm more likely to use in the real world. (I do know that there are lots of transferable dirt bike riding skills onto the street. I think it would just be too much of a guilty pleasure right now.)

Riding and Running and Stuff

I've been commuting a bit but the weather has been odd lately. And I've been running, or planning on running some days, which some times means I don't ride. I don't know why. It's been an odd last couple of weeks. Some distantly related sadness but nothing that affects me directly. Doesn't make it less sad. So, riding hasn't been at the top of my priority list. I become a fair weather rider when my head's not in it. I'm ok with that.