I'm not sure what's going on. There's possibly some gremlins doing their handy work on my bike. I dropped the bike off before I went to a conference. I was away all of last week. The bike had stalled as I pulled into my driveway after being serviced for a new battery and a tune up. I hadn't done any of the regular factory maintenance in a while and it was also due for an oil change. The previous stalling issue was determined to be a low battery. So, happily I rode it home feeling that the problem had been solved. But, alas, it died as I pulled into the driveway. Weird.

I dropped it back at Mike's Motorcycle and he said he'd keep it while I was away and maybe take it on a longer ride just to see what's up. He ran the computer codes but nothing had registered. He rode it for 60 miles and it didn't do anything. So, I picked it up today. I don't know what's going on. I can't imagine I'm doing anything odd to make it die. But, it died twice on the way home today. I was nearly home when it did. So, that's after about 20 - 25 miles of riding. It was fairly hot today but that shouldn't matter. Brand new gel battery. Fresh oil change. Hubby thinks it's bad gas. I was on my way to get gas when it died so decided to ride it home instead. I'll fill up tomorrow. I think Mike put gas in it on Saturday.

I just don't know what to do other than keep riding it to try to determine a pattern. If it's me, I'd like to figure out what I'm doing wrong so I can correct it. If it isn't me, at least I'll have more data.

A few things were different for this, our 4th road trip. We decided not to fight the heat by driving the Subaru Forester with it's cushy, comfy, air conditioned ride. We still chose a destination where neither of us had been before - Capitol Reef. And, despite having the car, we still decided not to camp. Ok, so far that's only one thing that was different. I guess it just felt much different because we didn't have the bikes. :-)

We drove straight through from the Denver area to Torrey, UT. It's a pretty straight forward route, west on I-70 and south on Utah Hwy 24. Torrey is a small town with no stop lights. There are several lodging options. We chose Austin's Chuckwagon Motel. Very nice folks, fairly quiet, there's laundry on site, a grocery with everything you could possibly need, and a deli that's open for made to order breakfast and lunch. Torrey also has several restaurants. We chose to eat at one of them three times. (The beer was cold and the pizza was tasty and it was just up the street.)

On our first day we did a drive through the park and a visit to the Visitor's Center, to scope out the hikes and scenery. We sat in on a ranger talk at the visitor's center which was about the geology of the park. That helped us get our bearings for the driving tours. There were several ranger talks throughout the week. We also did a ranger led geology hike. We were a little late getting to it but were able to catch the group before they headed up the ridge.


Another ranger led hike was about the petroglyphs in the park. Very cool!
Another hike was into the Grand Wash. We needed to time this one to go out early in the morning and also not when there was the threat of rain. It is just what it says it is, a flash flood wash area. It's also inside the canyon so not very shady. The rangers all warned us to take more food and water than we thought we'd need. It's only about a mile or so into the are called the Narrows. So, we felt well prepared to manage that safely. It's not a terribly difficult hike in terms of the terrain either. But, like good motorcyclists, we were aware of our surroundings and had an escape plan if we needed it.
During our hike it was so quiet. We were the only ones out that early. It wasn't even that early, maybe 8:30 or so. On the way back we started to see more people heading out. The cloud cover that we'd enjoyed for most of our hike was starting to break. That meant it was getting hot but also meant the storms weren't coming just yet. After we finished this trail, hubby wanted to check out another canyon he'd noticed just up the road. We hiked into the gully and into this small box canyon. It dead ended with what looked like a whirlpool in the sand. It was pretty cool and odd. We were imagining that water would come from the cliff above because the washed out plants were all facing that direction. It must be a sight to see when it's happening.

After our hike we drove back into town and had some lunch. While sitting there, we watched the storms roll in over the park and wondered how many people were hiking in the Grand Wash.
Afterwards, we went back into the park and did a short hike, the beginning of Chimney Rock. The hike goes to the top of a mesa overlooking the Chimney Rock. We didn't want to be up there while the lightning was going on. I didn't want to be up there period. 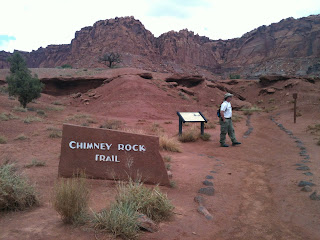 We ended up leaving a day earlier than planned but stopped in Glenwood Springs, CO on the way home. We didn't visit the hot spring but got up early to hike to Hanging Lake. This was something we tried to do last year on our way home but it was too late in the morning and way too crowded. This time we hit it just right. Amazing!

By the end of the trip we'd visited one national park (Capitol Reef), one national monument (Grand Staircase-Escalante), and two state parks (Anasazi and Goblin Valley).

We must return to both Goblin Valley and Grand Staircase-Escalante. We only drove through Grand Staircase which borders Capitol Reef. We lucked out with the weather on that day as well. The storms came through the day after and we are sure that the dirt road would have been washed out and flooded in places. And Goblin Valley has a lovely campground next to the start of the 4WD road. There are even two yurts to rent and they both had swamp coolers! It was terribly hot when we were there. We stopped on the way back home so didn't spend too much time there. It was about 2:00 or so, the hottest part of the day.

Once again, a very nice time was had by all. It was too short of course. We did run out of things to do in Capitol Reef and got bored in Torrey. That's why we left a day early. But, we did all the things we'd planned to do as well. So, it was a very successful trip. :-)

And now that the precedent has been set, and we don't have to ride the motorcycles on our vacation trips, we are wondering where we could fly to next year.... ;-)

And now, we must plan for our fall make up moto ride, as soon as we figure out why my GS keeps stalling. More on that later.