3 Things that Suck about Piloting a Motorcycle....

Now that I have your attention, I'll share this experience that I had a few days ago. I was on my way home from work and approaching a round about (thing 1). Behind me was a tailgater (thing 2). Ahead of me, approaching the round about from the adjacent park, was a pedestrian jogger (thing 3). These three sucky things were all converging at this point. 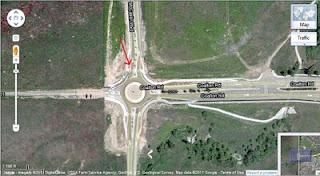 I was traveling south. I saw the person jogging well in advance but did not plan to stop at the cross walk because of the tailgater. Being a round about, that makes life on two wheels a bit more tricky. If I commit to the turn, I really have to complete that action or I might dump the bike.  Well, I shouldn't dump it but the tailgater is making me nervous. I'm slowing, however, because it is a round about. The jogger sees me, but her actions indicate that she thinks I'm going to stop for her, probably because I was slowing and also looking at her. (In Boulder, pedestrians are invincible because they workout constantly and let nothing stop them from doing so.)  So, now I have a choice, keep going and run over the jogger or stop and risk being run over myself. Apparently, my instinct is not to run over anyone. I hit the brakes before I start the turn. At the same time I glance in my mirror and see the front end of the car behind me nose dive before stopping. The jogger runs on with a thankful smile that I stopped for her. I swear loudly in my head at the tailgater and wish I was safe at home already.

It's been a long off season and I'm still shaking off the deep sleep of not riding. Lots of things seem a bit more conspicuous now that I'm back on the bike.

Maybe I'll drive tomorrow. Nah, it's spring break and the roads are pretty empty this week. And the weather is awesome. Maybe I need a long lunch ride to shake out the rust and build up my confidence. 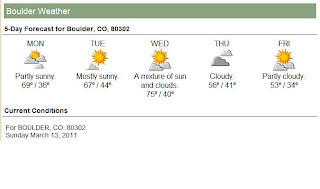