It's all good though. I've been home with my mother for about 2 months as she recovered from knee replacement surgery. I guess that explains why my last post was January 6th! Her surgery was originally scheduled for Jan. 9th but was postponed a week at the last minute. All went well, for the most part, and she is well on her way to dancing at her 70th birthday party in May. But, I did stay home for two months with no riding and very little running. As of last week, however, I am back at work full time. She also got the final ok and blessing from her surgeon yesterday. Her recovery is ahead of schedule he says. The man does great work! Anyone looking for a knee surgeon in the Denver area, I highly recommend him.

The weather has been a little crazy too. We've had odd snow storms and crazy winds. 80mph gusts today that are supposed to die down this morning. I saw a sad moto last week that had been abandoned in a wind storm. It was laying on it's right side with the side stand up in the air! And then, that night, it snowed. The next morning it was still there and covered in snow. That evening the snow plows had covered it even more. The day after that I think it was picked up. Very sad. 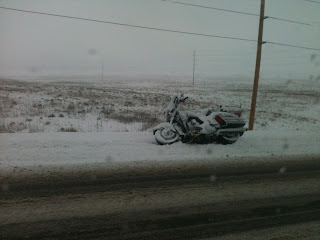 I was terrified just driving home in my Forester! I can't imagine trying to ride in those conditions. Although, I did see two others still upright and moving. Our neighbor across the street lost a nearly 50 foot tree as well that evening. It landed just a couple feet from our cars. And just missed his neighbors truck. It was a bad night. 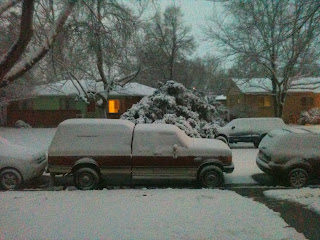 The good news is, my sister-in-law and her hubby now both have motos again!! I am so excited for the spring! Even though they live in Wyoming (speaking of wind) that just means we have an excuse to ride up there. Woo hoo! He has a new to him KTM. She's getting a Sargent seat for her G650GS and plans to farkle it up now that he isn't riding it anymore. :-)

I'm thinking about signing up for the Top Gun class again and also signing up my hubby. I think he'll like it. I've been away from riding for months now. I think I need a class. I do like the classes. :-)  (That reminds me, I never did finish the write up about that!)

Oh, and did I ever mention that there are babies on the way? No, not mine. My step- daughter and my niece are both due this summer. We are going to be quite busy!My old Civic, by the way, has now transitioned to my step-daughter so she can have a back seat for the coming grandkid. But, now, we still have just as many vehicles as before. We traded her my car for her small pick up truck. Sigh. So many cars... In case anyone else is counting we now own a 2000 Chevy S10 red pick up, a dead Bronco, an F250 XLT (shown above), 2011 Forester, 2009 G650GS, 1981(?) Honda GL650I, an 86/87 Honda Rebel 450, two CX500s (or is it really three?) and hubby also drives a Ford Escape for work that also lives with us but we don't own. When people come to visit us, they can't park anywhere near our house! LOL! All but one of the motos lives in the garage. Everything else lives outside. (Oh, we also own a cargo trailer.)

Ride safe everyone!!
Posted by Allaina at 8:24 AM 4 comments: