Dusted off the Spider Webs! 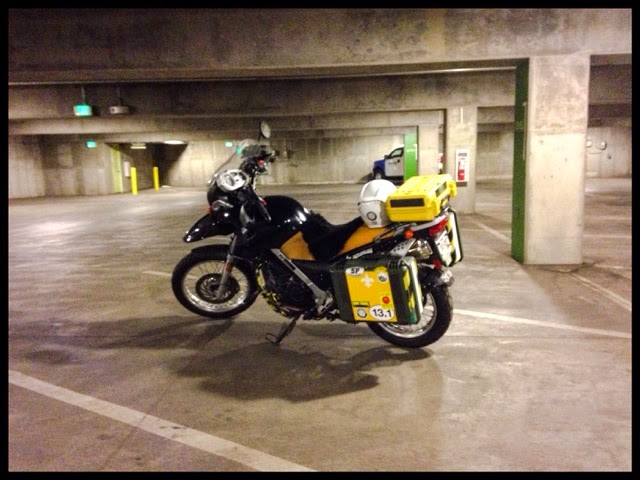 That could be my entire blog post right there. It's been so long, that alone feels like monumental news.

I used to think I wasn't a very competitive person. I know some competitive people, friends and family. I suppose I am just more subtle about it or at least I think I am. When I got on the bike this morning the first thing I did was look at the mileage. I remember being quite bummed when the Forester had more miles on it than the GS. I wasn't sure why but I have come to realize it's my competitive nature. I took great pride in being a year rounder, riding in conditions others wouldn't. Putting the miles on the motos rather than the cars. This carries over into lots of other things I do as well. When I was leaving my old CrossFit gym I remember breaking my "check in" record on Foursquare for the number of consecutive weeks I'd been there. That was very satisfying for me to make that milestone before having to start over at a new place.

This morning I thought about how I'd been tracking my moto miles on this blog. I remembered thinking or writing that I could keep track better if I counted from our anniversary rather than the first of the year. But then last year, we didn't ever ride the motos for our anniversary trip. This year, because of my new job responsibilities, I'm not sure we will even take a trip on our anniversary. This hasn't upset me as much as I thought it would.

It's not the miles that count. Maybe it's my age (45) or maybe it's just life. Maybe it's being in this new job that has given me a more positive perspective on things and has offered me the chance to reflect a bit. My life is pretty darn good. It really is. Not many people really feel that way. We have our struggles and worries for sure but, when it comes down to it, we are happy, healthy, and have two motos in the garage ready to hit the road on a whim if we like. How awesome is that?

We will continue to take those rides and add some miles to our bikes but, the total number of miles will not be what we reflect on in the end. It's the number of smiles, the amount of laughter, and the memories that we will cherish the most.

In the last few months, I've lost a bit of weight. I started this paleo diet with my old CrossFit gym back in October when they did a food challenge. I really needed something to jump start a better way of eating. I'd been eating for convenience rather than nutrition, shall we say. Oddly enough, a Starbucks breakfast isn't the best fuel for a high intensity workout. So, I accepted the food challenge because it came with a monetary prize. It was a 30 day paleo diet - no added sugar, no dairy, no grains, no legumes, no alcohol. The challenge also included a body fat test. The first two weeks sucked like nothing else. But week three was like magic. Week four was easy because I knew it was almost over. At the end of it, I saw dramatic results. My energy levels were much better. I could pay attention better at work and had more energy before, during, and after my workouts. I was convinced.

Since then, I've stuck to the paleo plan, tweaking it as needed, "cheating" when I want, and I've continued to lose weight and body fat. That's the good news. The bad news is related to this blog.

My motorcycle gear no longer fits! I tried on my Olympia Airglide pants and even with a belt they wouldn't really stay on if I had an unfortunate get off. My Draggin jeans, which I wear over my Bohn under armour (which does still fit) are also too big. So big, in fact, I could pull them off without unbuttoning or unzipping them! Wow!

So, I've done a bit of shopping and have a new pair of mesh pants. I'm still searching for a new pair of Kevlar jeans. So, yay for a healthier me! Not so much for having to replace my wardrobe so I can ride. :-) Ok, so that's not such a bad problem to have and I shouldn't complain but.... :-)
Posted by Allaina at 9:09 PM 2 comments: