Here's my better late than never ride report of my half day jaunt home from work.

I found a fantastic route, one I'd never been on before, directly out of Boulder (where I work) and in a round about way, to home. Here is a screen shot of a google map of the route. 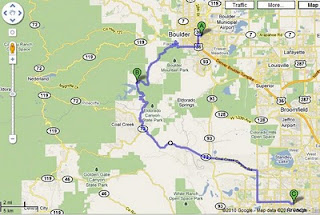 Baseline Road west out of Boulder is beautiful! It's one of those roads that makes you stop to think, why have I not been on this road before?! As soon as the road curves a bit south, it gets very twisty, and has fantastic views. There are folks hiking and cycling all around. The speed limit is 20mph. I had to stop myself from looking at the views so I could focus on the road and the ride. Fantastic! I'm definitely doing that again!

About 10 or 12 miles later, I turned off onto Gross Dam Road which is dirt for about 8 miles. And by dirt, I mean sort of rocky. It was also way cool! I really need some instruction for riding on those roads. I keep thinking I'm going to slow and that I might stall the bike. I'll have to ask my dirt riding coworkers about that. Anyway, this road was really fun, had great scenery and was populated but not terribly well traveled. If I'd fallen over or something, I think I would have been found but there wasn't so much traffic that I had to worry about it. Downhill hairpin turns on a rocky dirt road are very interesting. I wanted to stop for pictures but there wasn't really a good place to do that. So, I did stop at this parking area that was the start of a trail head to the rapids below. Awesome!

Here is the road soon after I first turned onto the dirt. I pulled over near a view of the dam. 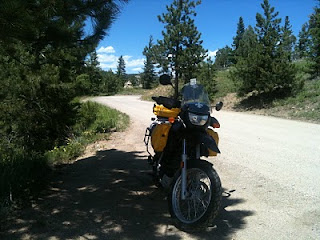 Here is the dam behind me. (I need to practice these self portraits.) 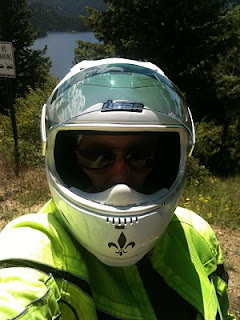 Another shot of my parking spot near the dam. 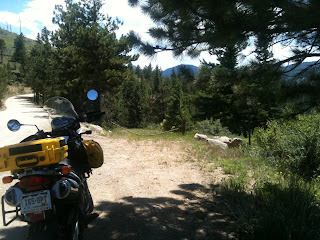 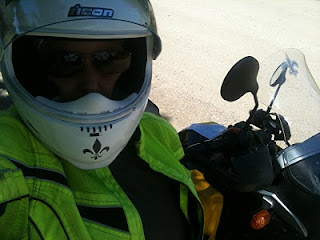 A view of the dam. 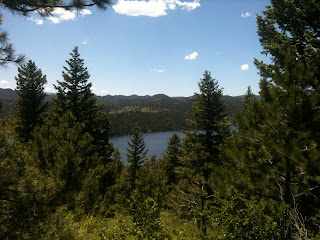 It was really a lot of fun and I am very glad I took the time to take this ride. It had been a long week and I was about to travel again for work. Even though it was only over the weekend, that meant I wasn't getting my weekend off. So, it was nice to have this relaxing break. :-) The whole thing was about 35 miles which isn't much longer than my commute. But it did take more time than my commute. But, this could be a nice long way home route in the evenings. :-)
Posted by Allaina at 3:20 PM