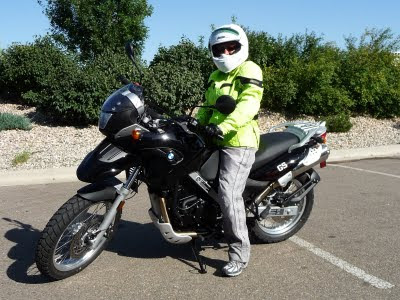 So, I'd been lusting after this particular flavor of motorcycle for quite some time now. I guess I've talked about it more often than I even realized because once I bought it, many people didn't seem too surprised. My brother at one point told be he wished I'd just get it because he was tired of listening to me talk about it. Ha! That was the spark I needed. And now, it is mine, all mine. :-)

This was the pitch.

I ride a lot. Since getting the Rebel 4 years ago, I've become quite comfortable riding and pretty confident as well. The Rebel is 23 years old. We don't know what previous owners have done or not done to it, even though it seems to run just fine. But, it's old and is showing it's age. Things are starting to leak. I put about 1,000 miles a month on it just commuting. As problems develop, there is no dealer who will work on it, so it's up to us to maintain it. The BMW has the same reliability reputation as the Honda. It is known for being able to go many many miles in it's lifetime. With a new one, I'd be able to maintain it properly from the beginning. All of the problems and solutions will be known. High miles on a new bike, especially the BMW, are nothing. And, it fits. I've test ridden it. I know I'll love it. I'll feed it and clean up after it and love it forever. Pleeeease!?!

Well, that's the cliff's notes version of the story anyway. :-) I was quite excited! That's me at the dealership. The whole family was there! Hehehe! My sister-in-law and her hubby, and my parents-in-law who happened to be in town, they all came and took lots of pictures to document the fabulous day. Below is the nice man at Northern BMW who sold me the bike. Thanks Jeff! He spent lots of time with us explaining various things about the bike and their services at the shop. 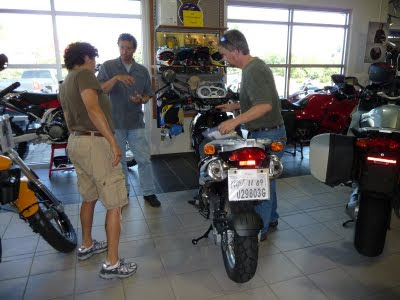 It was a fabulous day made even more fabulous by being able to share it with the family. :-)

When the bike left the dealership it had 13 miles on it. Today, 19 days later, it has over 800 miles on it. My break in service (600-1,000 miles) is scheduled for Saturday. I'll be taking it to Foothills BMW though since it is closer. The two shops are sister shops.
Posted by Allaina at 8:10 AM