Today was the MSF Advanced Rider Course held at the Mile High Marketplace (formerly the Mile High Flea Market). This class was originally scheduled for last weekend but after the big snow storm, they pushed it back a week. The official description for the class is:

Based on the Military SportBike RiderCourse, this one-day course is for experienced riders who desire to learn and practice more in-depth riding techniques. Classroom activities use small group discussions and interactive activities to address personal risk management strategies; to discuss options for cornering, braking and swerving; and to improve visual perception to identify collision traps. On-cycle range exercises provide practice in cornering, braking and swerving. There is no skill test in this course.

It isn't just for sport bikes. There were 5 students, including myself on the GS. There was a Harley Road Glide, an SV650, a CBR Blackbird, a Honda 919, and I can't remember the 5th one. Bummer. One of the students was actually an instructor. 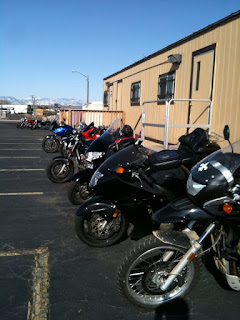 Here's a photo of some of the bikes lined up.

It was pretty chilly leaving the house at 7:30 am. It was about 30 degrees. But, fortunately, we spent the first few hours in the classroom. We spent the classroom time introducing ourselves and discussing some basics - braking, curves, attitude, etc. We did some interesting exercises that tested our road sign knowledge and ability to recognize the signs in a short amount of time. Another exercise involved viewing a photo of a real road situation, usually an intersection, and then trying to analyze what we saw. The image was only on the screen for about 2 seconds. Then we were given three choices and had to choose which was the most appropriate based on what we observed. It was very interesting and a bit unnerving too. But, I think that was part of the point. Stuff happens very quickly and you need to always be aware in order to make the proper choices.

Then we hit the range. Here's a shot of the range. It was a beautiful day! It was comfortable enough with our gear on until a little later, after lunch, when it really warmed up. 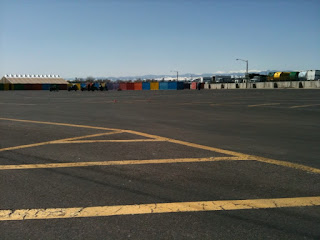 We did a warm up exercise riding around the range and doing some swerving between the cones. After that, we did some quick stops. The quick stops have been hard for me on the new GS with ABS. It's been hard getting used the ABS. I've never even driven a car with ABS so I wasn't sure how they worked. And I wasn't even sure when they were working or if they were working when I would brake. Well, the class helped with that. I had this problem on the Rebel too. I don't use all of my front brake for some reason. On the Rebel, I just stopped squeezing the front brake. On the GS, it is much harder for me to squeeze the brake lever all the way. My hand isn't strong enough or something. But, on the GS, in addition to not squeezing the front brake all the way, I'm also using too much rear brake, which sets off the ABS. Which means I'm doing it wrong. So, I got to practice the correct way to brake and eventually got it down. I really have to think about squeezing the front all the way and doing it smoothly. And also think about less rear. I really need to practice it more.

After those two exercises, the rest were all new to me. We practiced some cornering techniques, decreasing radius turns, going around obstacles in a curve, slowing in a curve, and also changing lanes. The exercises all built on the previous ones so by the end, I was doing quite well and started to feel much more comfortable on the GS. Which was my main goal.

I wanted to take the class because the new bike is just that - a new bike, a new experience. Even though I had lots of miles on the Rebel, all of that was like starting over with the GS. In fact, that was one of the factors we talked about in the classroom. The Hurt report found that most crashes happened to riders with more than 3 years of riding experience but less than 6 months experience on the particular bike they were on when they crashed. Except for the crash, I fit those statistics. And taking the class was my way of working on not being a statistic. I feel much more comfortable now than I did before. The friction zone is becoming more clear. The braking is getting better. I now have some skills I can build on. 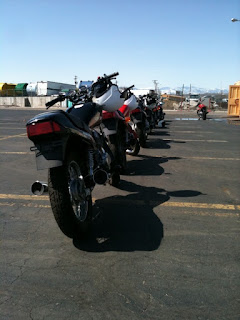 Our class wasn't the only one going on. These Nighthawks were part of the Experienced Rider Course for riders who have been riding for a while but don't have their endorsement. That was interesting to watch too. Lots of engine revving going on and horn honking. LOL!

It was a lot of fun and I learned a lot. I even learned some new techniques that I plan to practice when I'm carving canyons. :-) Ha, not that I do that often but now I feel more comfortable about it.

Balancing your risk level with your skill level will allow for safer riding. As your risk taking increases the chances for crashing also increases. As your skill level increases your chances for crashing decrease. However, most people tend to increase their risk after learning new skills which offset each other. Managing risks while increasing skills is a better risk offset. This lesson was discussed in detail. Ride within your limits. We hear it all the time and know it's a good idea but do we put it into practice? Minimize risks, increase your skill set, ride well. It's not just about the ride. It's also about the return home. If you summit the mountain but have to be rescued or die on the way down, does it count?

Some books where mentioned as good references for keeping up with your skills. Anything by Pat Hahn, was mentioned. "Sport Riding Techniques" by Nick Ienatsch was in the classroom but I didn't get a chance to look at it, it was highly recommended. A new Pat Hahn title, "Maximum Control: Mastering Your Heavyweight Bike" was also mentioned. I'll have to check some of these out from the library.

So, it was a fabulous day and I'm very glad I participated in the class. I got some good feedback from the instructors. One was quite impressed with my skills. :-) That is always a good thing. And the other instructor commented on all of our improvements during the range rides. I could certainly tell I was improving as the day went on. We started at 8:00 am and were scheduled to go until 5:00 or 6:00. We finished closer to 3:00 because there were only 5 of us doing the range exercises. That was good too. I wasn't nearly as tired after this class. Being March and not July helped too.

It was a good day. I think hubby will enjoy this class too.