Yesterday there was severe weather around the metro area. I some how managed to avoid all of it on my commute to and from work. There were a few sprinkles but nothing really to even think twice about. Halfway home I did start to see some lightning though. Not close to me but it was odd because it was coming not from the dark clouds that seemed to be chasing me, but from the blue skies and white clouds ahead of me. Lightning really freaks me out. So, I booked it home pretty quickly. When I got to my block, the street was wet as if I had just missed a short down pour.

For the rest of the evening, there were tornado watches and warnings to the east of us and also covering part of the metro area. Ominous looking clouds and thunder sounded around us but nothing too bad developed at our house. But, it was forecast to continue through today so I decided last night not to ride today.

Here's a photo of what the sky looks like right now. 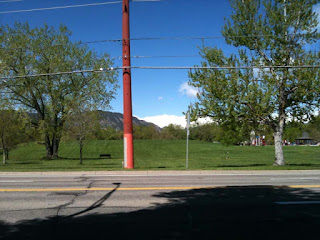 Oh well. I decided long ago not to second guess my decision not to ride. And I also had to carry some large tubs to work today anyway. So, oh well. I'll ride tomorrow. :-) I'll bet I could have secured those tubs with a bungee net though... They were empty anyway.

70's tomorrow and 80's Friday, Saturday and Sunday. Woo hoo!! Might be time to dust off the mesh jacket!

PS
It's raining and quite dark outside now...
Posted by Allaina at 11:05 AM

Email ThisBlogThis!Share to TwitterShare to FacebookShare to Pinterest
Labels: commute