Oh my. So, it wasn't even windy at my house when I left. I'm usually really good about checking the weather report the night before and even again in the morning before I head out. But, I some how missed the forecast last Tuesday. It was sunny and warm and that was good enough for me. Maybe I was just so excited about having a sunny and warm day that I neglected to see the wind gust predictions.

I got a relatively early start (which turned out to be a good thing) and took my usual route when I'm not in a hurry. When I got to Standley Lake, everything was still very calm and sunny. I went around Standley Lake to Indiana and made the right turn onto Indiana. The wind hit me like a wall. Oh well, I thought, I was just a little surprised but didn't think too much of it. Until... it didn't let up. And then I realized that I hadn't even seen another motorcycle out on this bright, warm, sunny day. Hmmm. That made me start to worry. But, there in the distance was another moto coming towards me. On windy days I always feel like I'm leaning way over to compensate but in my mind I think, I can't be leaned over that far, can I? Well, the on coming motorcyclist was leaned over pretty far too. Uh-oh. It was so windy, I actually shifted my weight to the outside, hanging off the seat a bit, just so I could keep going straight.

But, as usual, buoyed by the other moto, I thought, I can do this. Besides, I'm half way there. Then, on the shoulder, not long after I passed the other bike, there was another, parked on the side of the road with two guys standing next to it. They looked pretty winded and a bit worried. Not good. But, I'm halfway there, I thought, and this wind will not last all day.

So, then I started thinking about parking as I'm hanging off the edge of my seat trying to maintain a straight line. If it's this windy here, in Boulder it will be quite gusty. There is a farther away moto parking lot that is protected by a small brick building and another structure. I thought I'd first try there and if the wind was still too much, I'd just park in the underground parking garage at the 29th Street Mall.

Once I got to the top of the hill on Indiana, which is where hurricane force winds usually happen, I'd fully decided not to turn around and also had a parking plan. I also knew I'd take the longer route through Superior, which might offer more protection from the wind. The problem with that route was that the wind had knocked out the stoplights through town. Ugh. So, I not only have to try to keep my bike from being blown over (and trapping me underneath) but now I have to dodge the traffic that doesn't know how to manage a four way stop when the lights are out. I saw a few near misses, fortunately none involving me.

The hardest part was being stopped for so much of the time. That's when the wind seemed hardest to deal with. But, I managed to keep the bike upright.

When I got to work, there were no other bikes parked in the lot. (Not yet anyway, more would arrive later in the day.) I wasn't surprised. So, I was able to get the spot closest to the building. 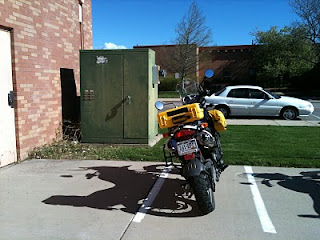 When I pulled in, everything got very quiet and calm. Yay! I sat there for a little while to gather my wits before attempting to walk to my building. Later I took this short video walking from the parking spot and out into the open.


That was taken later in the morning closer to noon. This next one was taken right after I got to work and walked from the bike to my building.

Things did calm down quite a bit by the time I had to head back home. It was still windy but more a normal sort of windy not outrageous sustained winds like that morning. The most memorable bit, other than figuring out how to hang off the edge of my seat to maintain balance, was riding through a pack of tumbleweeds. I managed to miss every single one! Don't know how that happened but I was glad it did.