Nearly lost a side case!

I worked only part of the day today so I decided to take US36 out of Boulder. I never take this highway because it's always quite backed up during rush hour. It also isn't the most direct route home but can sometimes be a quicker way out of town at the right time of day. It was the right time of day so off I went. I took Foothills Parkway which has a nice long sweeping on ramp. Aside for the many patched potholes on the bridge, it's pretty smooth and kind of fun. 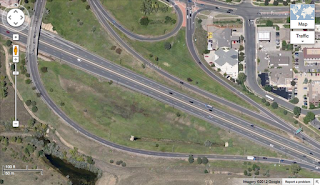 In the above image, the on ramp travels from the top left corner down to the bottom right. Here is a close up of the bridge. 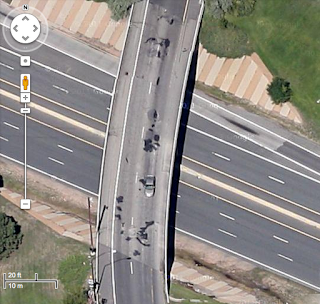 All of those darker colored spots are patched pot holes. I may have been traveling too close to the vehicle in front of me. People tend to slow down a lot coming over the bridge. I don't know why people in Colorado like to slow down as they are entering the highway. Drives me crazy. Anyway, I didn't see that one of the patched pot holes had sunken and become a hole again. I hit it fairly hard but not so much that I was worried about it. But, right away, the bike started handling weird. It felt like the wind was blowing me to my right and I was also drifting to the right a bit. So, I leaned to my left more to compensate. I also noticed the car behind me had dropped well behind me. I then caught a glimpse of my side case, which was odd because, I shouldn't have been able to see it just by glancing behind me. I reached my hand behind to touch the case and was able to grab the side case rack mount. Bad news. I looked down and the case was dragging alongside the moto.

I was able to pull over fairly quickly on the dirt shoulder just off the merge lane. It was a good spot because there is a fairly long merge lane here so I'd be able to get back on without much trouble. Here is the dirt shoulder at the bottom right of this photo. 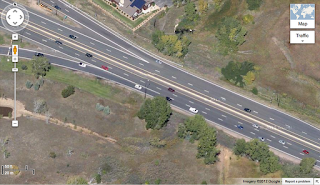 I always carry several bungee chords with me so I was able to secure it to the rack for the ride home. No problem. I was really glad it didn't fall completely off. I don't think I would have been able to retrieve it safely. There wasn't much inside either which probably helped all around. My rain jacket, a cargo bungee net, and my winter gloves. Earlier this morning I had my shoulder bag in there and my work laptop in the other one. Had it been any heavier, that could have been trouble.

Here are some photos of the side case after it's ordeal today.
So, apparently, the lock that holds the case on and locks it to the rack popped out when I hit that hole. It's supposed to look like this: 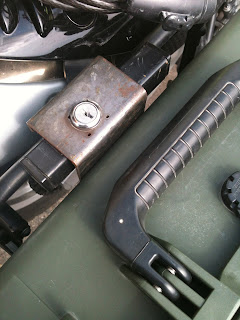 I still need to inspect my rim and tire. The bike seemed to handle just fine after I strapped the case back on. But, I'll give it a check anyway just to be sure.

I never really felt out of control. And I certainly never felt afraid or in danger. I evaluated the situation as it was happening, found my escape route, pulled over safely, and dealt with the problem. What I think I did do wrong was being so close to the car in front of me that I didn't see the pot hole before it was too late. I had just enough time to get on the pegs and that was it. I even know that this is a poor part of the road with bumpy spots and still didn't slow down. That was not a good way to enter that ramp. I also could have been in the right lane instead of the left as there was not traffic around. I was actually considering that move when I hit the hole. So, I suppose, I didn't evaluate the situation far enough in advance.

That said, I wonder when the lock may have popped out in the future. Clearly there was something wrong with it. It's not a part of the bike I would have thought to include in my pre-ride check. The cases have always been a bit wobbly but we've always felt they were secure. Maybe the rubber bit underneath had come out? (Looking at the photo, I can see it is still there.) If I'd checked I would have noticed that. But, I don't think that would have made me worried. I'll review it all with the hubby when he gets home. He won't be happy that the case failed since he built the mounts for them.