I wanted to get a quick ride in before our family solstice celebration Sunday evening, so I mapped out this route, just west of Golden. 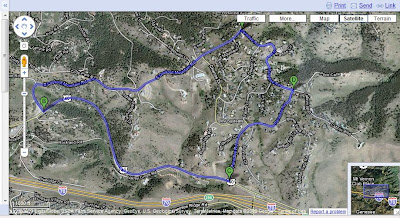 I even printed it out this time, and made sure I had the real map in my tank bag before heading out. I have a terrible sense of direction and time management on the bike. :-) I had two hours. On the way out, I passed this empty parking lot near 44th and McIntyre that I've always thought would make a great place to practice some slow speed maneuvers and emergency stops. Passing it, I thought to myself, I'll stop on the way back. As I got into Golden, I thought I might not have enough time to do my loop and practice, and I wasn't planning to return home this way. So, I looped back to McIntyre on 32nd and hit the parking lot. 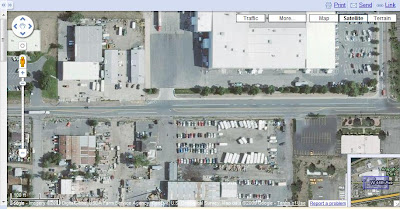 In this image from Google maps, it is the lot to the left of the empty one. This is an older image. The lot is well maintained, with fairly new asphalt, and it rarely has any gravel or any other obstacles to slow speed motorcycle maneuvers. I haven't done any practice on this bike yet so I was glad to have time enough today to take my time with it. I started with some sweeping turns and a bit of weaving and then moved on to quick stops and figure eights.

Below is the MSF range at Front Range Community College where I've taken a few classes. 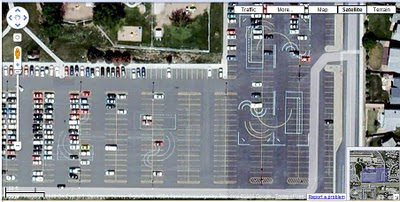 I was trying to figure out how large the figure eight box was but didn't look up this image until after I got home. So, instead I decided I'd just practice a possible real world situation. I did figure eights, between the parking lanes as if I was traveling down the traffic lane, got to the end and had to turn around. It was fun and gave me something to think about while practicing. The turns were lots of fun and I think I did very well. I wasn't sure how I'd handle the bike. I killed it once and put my foot down once but other than that, it was a good time.

The quick stops were weird. This bike is a lot different than the 450 Rebel. I'm not sure if it's the knobby tires, the ABS, or what but it felt weird. And it was harder to brake quickly. I think it'll be good for me to take the ERC again with this bike. I'm pretty sure I was doing something wrong but I don't know what it was. I'll need an instructor to point this out to me. But, it was good to get a feel for how the bike would handle and how I would handle the bike. I think I was braking too much and should have braked more gradually. I'll have to try it out again when we get another warm day.
Posted by Allaina at 2:50 PM