The 5th Day of the Devils Tower Anniversary Road Trip 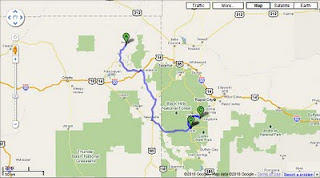 On the 5th day we checked out of our lovely chalet in Hulett and said so long (for now) to Wyoming. Our destination this morning was Mount Rushmore and Crazy Horse. We weren’t sure how far we’d get or which roads we’d travel because we weren’t sure how long some of the twisty roads might take to travel. One of the things I really wanted to see and had been excited to see was buffalo. We joked that I’d sort of been working my way up to a live buffalo – starting with the Vore Buffalo Jump and all the buffalo bones there followed by my tasty meal of buffalo medallions on our anniversary in Deadwood. Next would be living buffalo in the flesh! LOL. But, the more I read about Custer State Park, where there are herds of buffalo roaming around, the less safe I felt about riding the motorcycles to see them. So, Tim and I decided we’d not take the road that runs through the main part of the park. (We also didn’t feel like paying the $10 per bike entrance fee.) Instead we decided to ride to the town of Custer, have lunch and then decide where to venture off to.

Along the way, we stopped at a scenic overlook and took some photos there. 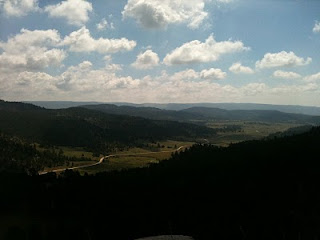 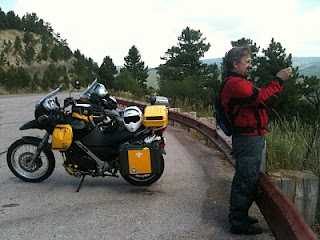 We also passed by Jewel Cave National Monument. Actually, we stopped at the visitor center since it was so close and on the way. That road, we were pleased to find out, was very interesting to ride on. Unfortunately, I’d forgotten to mount my camera on the moto so I didn’t get very many photos. In the park, which had motorcycle parking, we wandered through the visitor center exhibits and took a potty break. We drove by Wind Cave as well but didn’t stop there. The skies were starting to look questionable so we pushed on to Custer, SD. 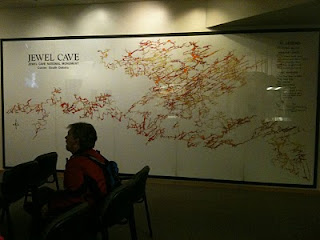 In Custer we drove the length of what looked to be their main street and decided on a nice looking place for lunch. Oddly enough, I didn’t take any photos of the restaurant or our meals. We both had burgers – one elk and one buffalo. They were yummy and so were the roasted red potatoes that came with it. The restaurant had some then and now photos of the area by one photographer who was documenting the changes. He’s put out a book, “The Black Hills Yesterday and Today”, as well. We looked through the restaurant’s copy. Very cool. 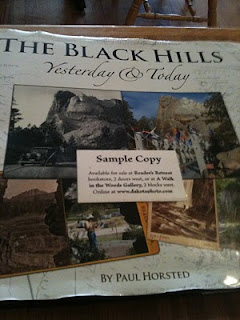 From there, after consulting with the waitress, we decided to ride the road that would take us by the Crazy Horse Monument and up to Mount Rushmore. Our goal was to get up there and head back to try to get to Hot Springs, SD to spend the night there.

We got to Crazy Horse and pulled off to take a photo from the distance. We really weren’t that interested in seeing it up close even though we’ve heard the exhibits are pretty cool. We just weren’t going to pay for the entrance fees for each bike at each of these monuments. That was going to add up very quickly. In the photo below you can see the dark skies we were also hoping to avoid. We kept getting a few rain drops here and there and really didn’t want to be caught in a thunderstorm with no shelter. 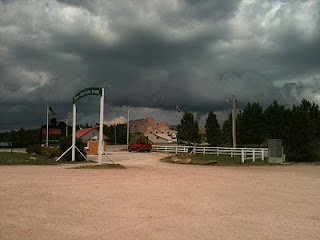 Blue skies in the other direction. 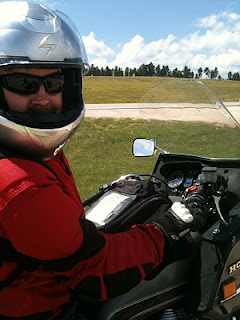 From there we headed off to Mount Rushmore. Turns out we came at it from the backside. I kept telling Tim, as we got closer, that I thought we should be able to see it. It just felt like it was right on the other side of the rocks we were riding alongside of. But, there weren’t hoards of cars or people either, which is usually a sure sign you are near the national park. So, we kept going. Then, all of a sudden, we came around a curve and there it was! But, it was kind of behind and to our left so we couldn’t see it very well. So, we thought, we’d have to go into the parking area in order to see it. (It’s great to have the communication devices so we can discuss these things.) I pulled over so we could turn around. We’d gone around another curve at this point so we couldn’t even see it from the point where I’d pulled over. As we pulled back onto the road after making our u-turn, there it was! So cool! We then decided to just pull over quickly on the motorcycle sized shoulder of the road and snap a quick photo or two. Tim had his phone handy but I didn’t so those photos are from him. Awesome!

We were satisfied with the view we had and decided not to pay the parking fees to see the exhibits. Next time. We did pull over to check out the profile view. I snapped a couple of photos there. Then we were on our way back to Custer. We took a slightly different route back which took us part way through Custer State Park. We didn’t have to pay on this road so it was cool to be able to see the wide open space. And guess what! We even saw three buffalo!! That was so cool!! They were each hanging out by themselves so it didn’t seem terribly scary. They are very large animals. Very, very cool!! 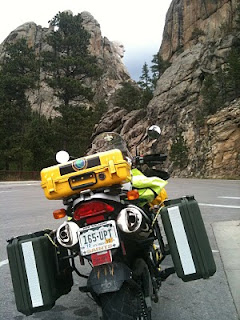 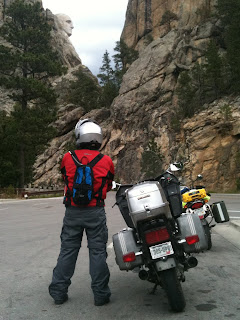 As we got closer to town, we thought it might be better to just stay in Custer instead of trying to push on to Hot Springs. The storm hadn’t passed yet and we didn’t want to get caught in it. I remembered seeing a sign at a motel for $39 rooms. For one night, that would do just fine. It ended up being $49 but we were ok with that. 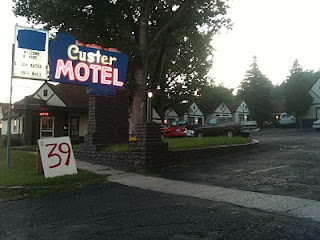 It was also right across the street from a couple of restaurants which meant we didn’t have to gear up but could walk there. We checked in, unpacked the bikes, shook off the road a bit and sat for a couple of minutes before looking outside to see that the sky had opened up. It was raining really hard. Our luck had held once again.

So, we watched some TV and waited for the rain to stop, which, of course, it did just in time for us to go to dinner. The sun even came out. We moseyed across the street to a sports bar like place and had some steaks. They were ok. Mine was very overdone so I sent it back. The beer was cold and tasty. After dinner we walked down main street but most of the shops were closed. But, it was all good. We were still on vacation.