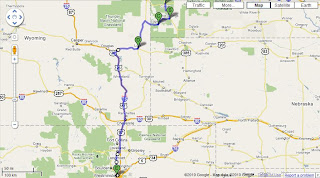 On day 6 of our Devils Tower vacation, we headed for home. Since our original plan was to get to Hot Springs, SD, we thought we'd locate a cafe there and have a small breakfast before hitting the road. Hot Springs isn't a large town but we were surprised to find that there wasn't much open this morning. There seemed to be plenty of places but we were just out of luck for some reason. As we drove through town we came upon this small drive up and walk up coffee place. You can see our motos across the street parked in front of the post office. 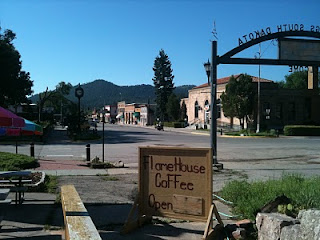 And here is my lovely hubby standing next to his moto. That's the coffee shop in the background with the rainbow umbrellas. 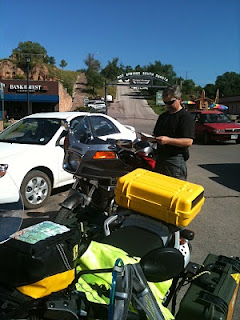 He got coffee and I got juice and we each got a muffin. 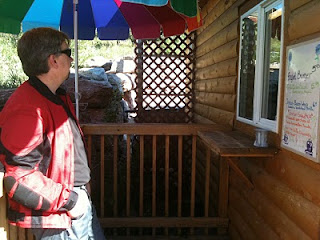 While waiting in line, we met a couple from Rapid City (I think) who were on vacation in Hot Springs. Coincidentally, they have kids living in Colorado, one in Loveland (I think) and one in Arvada. Cool. :-) They asked us if we'd gotten caught in the storm last night. We said we'd just missed it, that we checked in to the motel in Custer just before the rain came. They then mentioned the big storm that had come through Hot Springs last night. Lots of wind, lightning, thunder, hail and rain. Trees were down and the power was out. They told us we were lucky we weren't in Hot Springs.

Well that explained why so many places were closed that morning! And it also explained the note taped to the door of the post office saying they could only sell stamps and not mail packages due to the power outage. And to think we almost pushed on through to get to Hot Springs the night before. It seems our luck continued to hold throughout the vacation! Wow.

This photo is of the library across the street from the coffee shop and post office. You can see the downed branches in front. 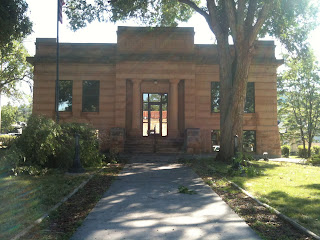 After our breakfast, as we drove through town, there were signs and trees and branches down all over. Even some small bits of debris in the road. Power crews were out working on down power lines. Wow. We were feeling very lucky indeed to have missed that storm.

From Hot Springs we headed west on highway 18 through Edgemont, SD and crossed the border back into Wyoming. From there we went south on highway 85 to Lusk where we had some lunch. It was another fabulous lunch at some small place in a small town. It was the place to be as the crowd came in just after us. We each had wraps with chips and a drink. Yum. :-)

From there we decided to head for the interstate in order to get home the most direct route. It also continued the theme of not traveling on the same roads twice. :-) The weather looked to be threatening but we made out ok. We did stop to put our rain gear on just before getting to the interstate, but once we hit the super slab, we took off the jackets and it was all clear from there on. You can see the dark clouds that had been chasing us in the photo below. 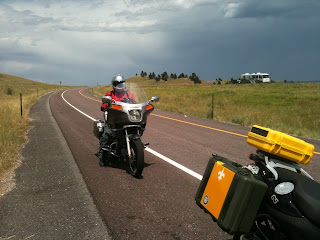 We stopped to hydrate ourselves and our vests at a rest stop gas station somewhere along I-25. I was starting to feel very ill from the heat at this point so we took quite a long break to fuel up and drink lots. 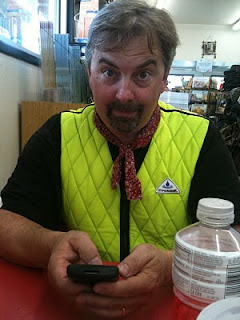 Once we got into Colorado, we started hitting some rush hour traffic. Cheyenne Frontier Days was also going on and we ran into some traffic there. Once we got south of Ft. Collins the traffic was very heavy. So, we pulled off I-25 at Loveland, had a potty break and more fluids and made our way to hwy 287. From there it was a straight shot home and much less stressful.

We traveled about 385 miles this day, which was by far our longest not only of this trip but, ever! We felt pretty good though and it was kind of weird pulling into the driveway knowing we were done. The next day we still felt a desire to be riding. :-)

Here are the motos safe at home in the garage. :-) 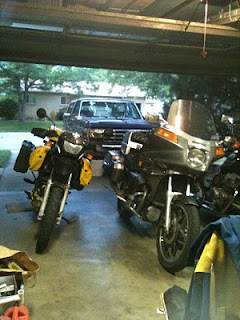