Day 2 we rode from Torrington, WY to Hulett, WY, our home case for the next three days. Here is a map of the route: 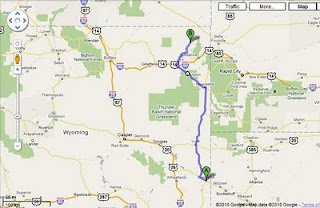 We checked out of Torrington after a Holiday Inn breakfast. It wasn't very tasty - powdered eggs, yuck! After checking out we gassed up and I took more photos of our motos. :-) 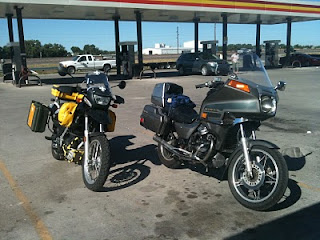 The long unwinding roads continued for a while. Not much in the way of photo ops until we got our first glimpse of Devils Tower. Wow! It just appears out of nowhere! Very very cool. This was taken from the first pull out. We were still pretty far away but my camera zooms ok for the photo. 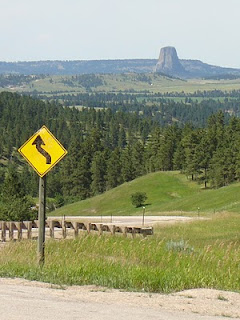 This is at another closer pull out that had a display sign about the tower. We took this using the clamp mount on the moto mirror and the camera timer. :-) 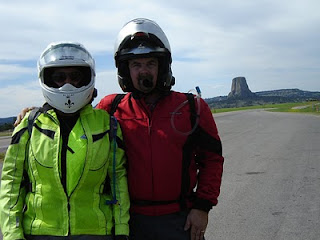 And here are the motos and the tower. :-) I like to take photos of the bikes. Have I mentioned that? 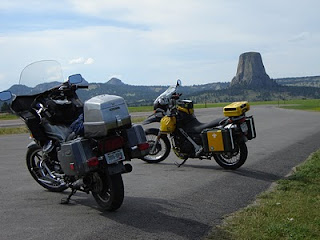 Devils Tower is about 9 miles from Hulett. Here is our cabin and home for the next 3 days. Have I mentioned that there is no shade at all in Wyoming? Oh my goodness it was hot! I felt ill it was so hot. The cabin had a small window unit sized air conditioner that just could not compete with the days heat. We actually went outside to sit by the river to cool off. 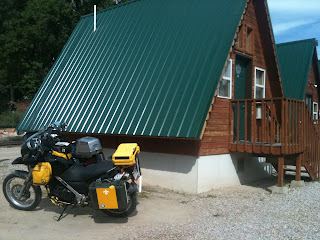 We decided to get some dinner and found the local bar/cafe to be welcoming. The food was ok although my meal that night wasn't the best. But, the beer was cold and so was the restaurant so, it was all good. After dinner we stopped at the corner grocery store to buy some cold drinks, a styrofoam cooler and ice. They were out of ice. I was very sad to hear that as I was really overheated. But, they said the Hulett Motel sells ice as well so we headed back. (It was across the street.) No ice at the motel either. Their freezer was on the fritz. Ugh. We toughed it out for the night and decided to go back to the grocery in the morning when their ice would be replenished. I think the cabin finally cooled off around midnight or 1am. It was a long night. A couple of days later we found out the temperature that day was 104 degrees. Ugh.